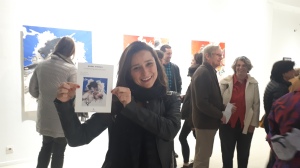 Ovidiu Batista (Romanian, b. 1987) Is a painter characterized by his dreamlike, surreal, and expressionist interpretation of society. In his work, he draws not least on inspiration from his many travels infused with current trends and news from social media and the fashion world. Born in the city of Barlad, Batista studied at the University of Art and Design in Timisoara (Romania). In 2009, he moved to Ecole de Beaux Art de Metz (France) during the first year of his master's study, and in 2010, he won a residency at the Fundación CIEC Betanzos-A Coruna (Spain) where he worked toward graduating with a master’s in Etching, Lithography and Silkscreen. Starting in 2012, the artist collaborated with BetterPress Studio in Rome (Italy), realizing silkscreen workshops and a few expositional projects, while also participating in collaborations with other international artists in Rome and the Tuscany region. Many of Batista's projects explore aspects of the quotidian life, including a conflict between conscious and unconscious thinking and acting among individuals in contemporary society. Drawing on his experience as a makeup artist, favorite topics include the particularities of the makeup industry, the question of how we define our personal aesthetic identity, the influences that shape us, the limits to the search for beauty, and, as perhaps the most interesting aspect, the follower’s desire to become an influencer. The artist's work has been the subject of both solo and group exhibitions at institutions and galleries, including Arancha Osoro Gallery, Oviedo / Spain; Festival della CREATIVITA Museum of Contemporary Art / (MACRO), ROMA / Italy; Monty4 Gallery, A Coruna / Spain; Quinta del Sordo, Madrid / Spain; MÚSI La Felguera, Asturias / Spain; Art Fair Cuarto Público, Santiago de Compostela / Spain; Art Show, Busan / South Korea; Alonso Vidal Gallery, Barcelona / Spain; Fundación CIEC, Betanzos / Spain; Fig Bilbao / Spain; Come find me, Florence / Italy; Betterpress Lab, Roma / Italia; Espacio Cultural Pedro Remy, Braga / Portugal; Art Residence Creative Analog, "From photography to graphics and back.", Kostanjevica na Krki / Slovenia. Ver todas las entradas de BATISTA